A quick video showing the card being inserted, powered on and it booting Lemmings from the Lotharek HxC Emulator.

Hopefully I get to post a video of it working in my 80b one day.

Sent a PM regarding the board.
Top

psmart wrote: ↑Fri Jun 04, 2021 11:38 am @dat-alex - looking good, what package are you using, Quartus II schematic capture? I havent studied the differences between the 1772/1773 but I should image it wont take much effort to update the 1772 design. I will take a look soon as Im currently porting my Sharp MZ Series emulator to a Cyclone IV device with less resources, modularising at the same time, once done I will advance by adding the missing FDC controller.

Yes I use Quartus II for (cheap)CycloneII module implementation and ISE 14.7 for XC9572.
As I already have a WD1773 in my lab right now. I tried to redesigned digital logic to a single xc9572 but I only have PC44 pin chip and I am sort of I/Os pins!
I am waiting for a bigger PC84 XC9672 so I can also include driving buffers to/from wd1773 to Drive mechanics(Yes I want to use real Floppy Drive in the shake of retro-feeling and keeps everything as original as I can

)
A core of 1773 (with the ready signal) would be nice to include everything on FPGA but for the moment I will step one step at the time as I have the WD1773 .

I would really like to have a spare PCB (as testing bench source) if you have one. (please send contact infos etc)

My dream is to boot CP/M (& other stuff) from real floppy to my beloved 80Β!
member of retroclub.gr (Thessaloniki , Greece)
Top

If i get to developing the 1773 before you will pass it on. Currently writing VHDL/C for an OSD on my emulator (similar to MiSTer but embedded), most of the emulator core is now functional on the Cyclone IV so once all this is done will turn to the much needed floppy controller.

Please PM me your address and I'll put a board and GAL in the post. The board successfully works in an MZ-800/80B/2000 with an HxC Floppy Emulator so should have no problem with a real floppy disk. If your want the sound effects get an 8" drive

If i get to developing the 1773 before you will pass it on. Currently writing VHDL/C for an OSD on my emulator (similar to MiSTer but embedded), most of the emulator core is now functional on the Cyclone IV so once all this is done will turn to the much needed floppy controller.

Good luck with your project my friend!... (keep us inform so we can... take 'a sneak peek'

Please PM me your address and I'll put a board and GAL in the post. The board successfully works in an MZ-800/80B/2000 with an HxC Floppy Emulator so should have no problem with a real floppy disk. If your want the sound effects get an 8" drive

Hmmm 8'' drive .... you 'put' me in big thought my friend ....why not! I will try it for sure if I could find an 8'' sugart drive.
(I already repaired a faulty FACIT 4070 paper tape puncher and .... punched some programs...maybe next project will be to load from paper tape...I am serious about it! hehe! -by the way ?I think that in a sharp model 'kernal' rom there is a paper tape loading code... 80K maybe?)
member of retroclub.gr (Thessaloniki , Greece)
Top

- One of my first jobs was to convert a Quantovac Mass Spectrometer using a PDP11/08, Paper Tape storage and dot matrix printer to be fronted by an Amstrad CP/M computer, converting all the paper tapes to floppy, modifying the electronics/writing drivers to interface with the PDP11/08 to bootstrap it from the Amstrad and write a complete suite of test scenarios and reports for use with the Quantovac. My experience from back then tells me paper tape is a step too far beyond

- although very cool to have in the vintage setup.

Sent a PM regarding the board.

Board as despatched, couldn't PM photos so adding them here. 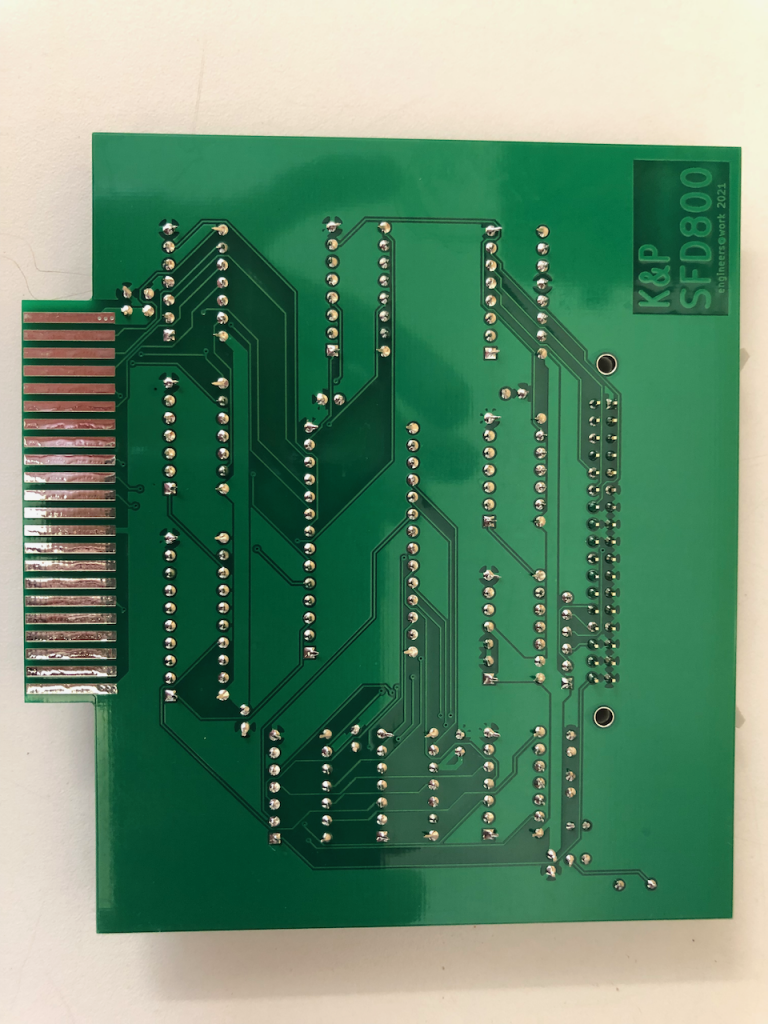 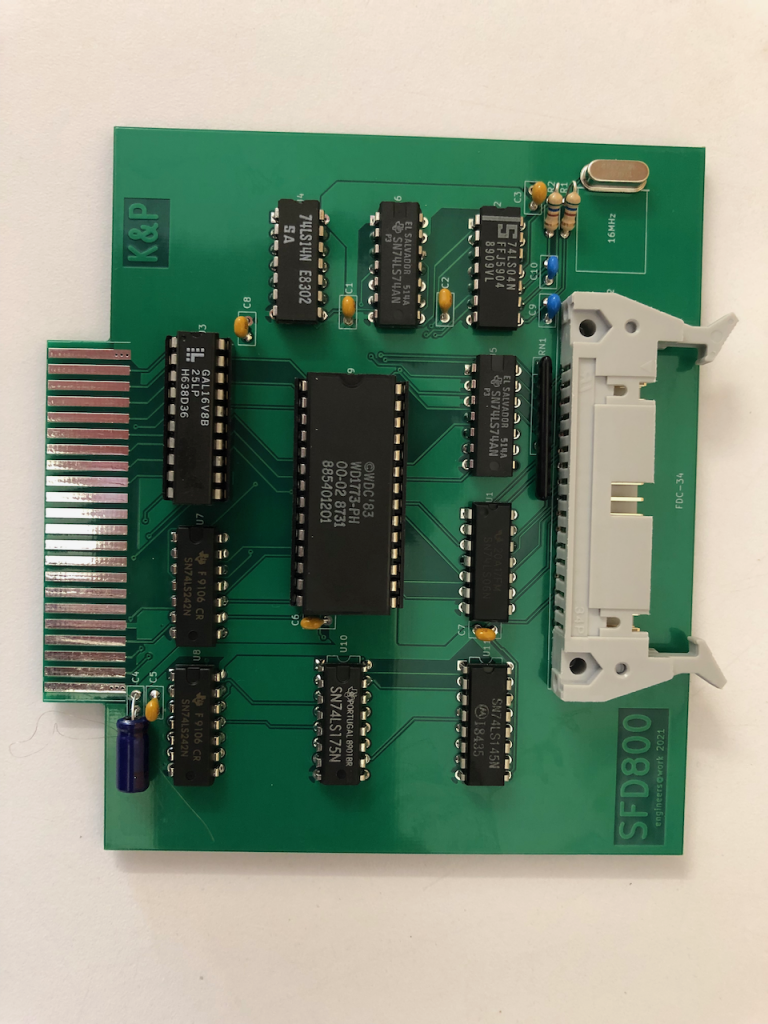 It worked right away (Yay) and loaded CP/M. However after a while it gives a lot of read errors. On the HXC I see it seeking track 0 on disk 1 and 2 like its looking for something. Do you use a CFG file on your HXC? I would be curious to see what settings you use.

I will try the card in my other 80b and see if the problem exists there too. I will also try it in a few other slots. Hopefully its something simple. 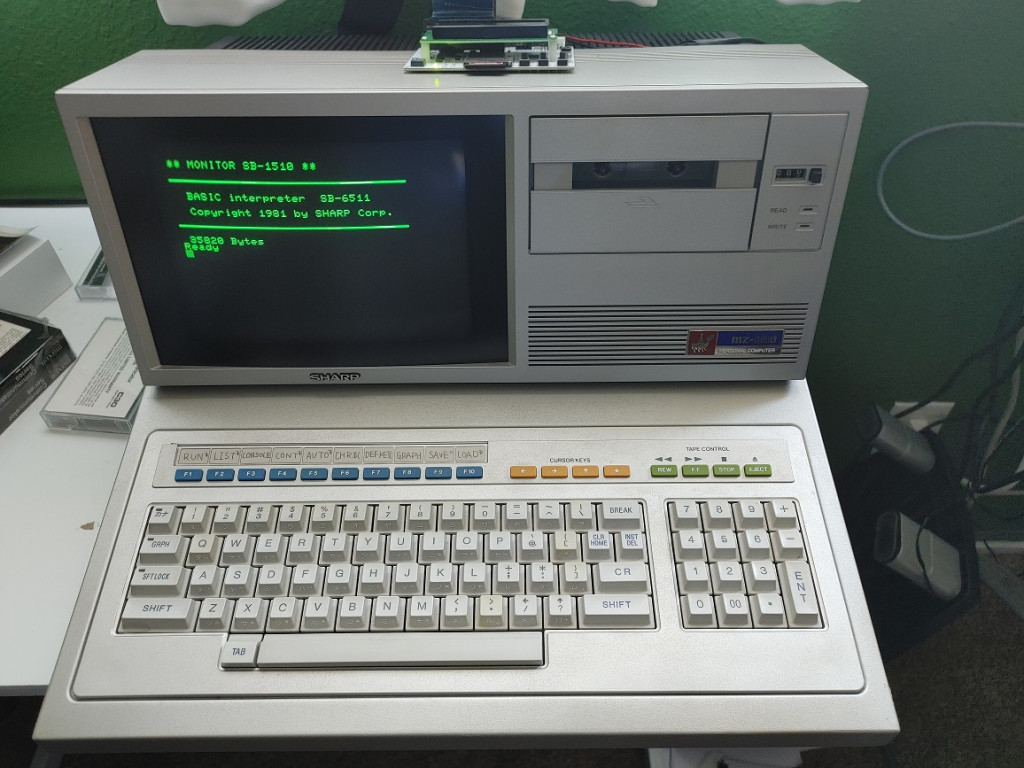 I dont have the HxC with me today so will need to check tomorrow but could it be RF interference from the monitor (ie. where the HxC is sat?). I dont think I did anything special with the HxC other than convert the images found on original.sharpmz.org (the zip file of 37+ disks) and converted them to HFE format.

When it starts to give read errors, if you reset the 80B does it still boot with errors? ie. just to discount a heat issue? The other issue is bad conversion of the disk images, has it not converted some tracks as the normal mode of operation when a read error occurs is to seek track 0 then step out to the right track again.

Will post my config tomorrow but any more info you can give would be a benefit in resolving it.

ps) Very nice looking MZ-80B you have, completely different colour (much lighter) to the German 80B I had!
Sharp MZ/X Series Projects and FPGA Emulator
engineers@work : https://eaw.app/sharpmz-series/
Top

I actually ended up cleaning all the contacts on the edge connectors in the I/O bay and the pins on the MB and everything seems to be working now. I also switched over to the Gotek which works fine too.

Thanks for complimenting the machine. It lived under a dustcover all its life so only a couple of keys show any signs of yellowing. The screen is a little soft on the edges but that is a problem for another day.
Top
Post Reply
55 posts